As the only safety-net hospital in Monterey County (1 of 15 in California), Natividad Medical Center serves more than 135,000 patients every year. The 172-bed acute care
hospital is also home to the Central Coast’s only inpatient and outpatient acute rehabilitation program and is owned and operated by the county.

Regular challenges around NMC’s radiology services began to arise early in 2013. The hospital’s CT scanner was very timeworn, causing the hospital serious downtime around service and repair, according to NMC Laboratory and Radiology Manager Heidi Riggenbach.

Concurrently, Riggenbach explained, the ER was getting busier (the hospital receives about 47,000 emergency visits annually) and included an increasing number of trauma cases. The hospital was also implementing code neuro procedures.

It was then that NMC’s administrators knew it was time to upgrade the hospital’s technology and that Riggenbach began the search for a CT lab project partner – specifically, one that would provide a seamless solution to ease the staff’s workflow, putting the focus back on patients, instead of equipment upkeep.

Riggenbach’s task became more unique when the county put out a request for proposals to its four hospitals. At that point, Monterey County was one of the few counties in California to lack a trauma center. In the quest to receive the Level II Trauma Center designation, NMC would require an interventional and angio mobile lab solution in addition to a mobile CT lab.

“Modular Devices was very accommodating for our schedule,” she said. “There were other vendors who were making it difficult to simply get an initial consultation.”

She also enjoyed the ability to choose from differing imaging technologies.

“At first we weren’t sure if we wanted GE or Siemens equipment, and it was convenient that Modular had more than one option to choose from,” she said.

As for the Mobile CT Lab installation, Riggenbach described it in one word: simple.

“After having a few conference calls, the delivery went really smoothly. We let them know the date we preferred; they accommodated it. They arrived when we expected them to, installed the lab, provided training – and that was it.”

Since the installation of the mobile CT lab in September 2013, Riggenbach was pleased to report that uptime for NMC’s CT services is at 100% and turnaround time for ER has decreased.

“Previously, if we had an overflow of patients, they just had to wait. Now, a tech can take patients to the trailer for treatment.”

Furthermore, after the implementation of the 16-slice CT scanner lab, the hospital has added a few more advanced procedures that it was unable to accommodate before with its in-house 8-slice scanner.

Once the Mobile CT Lab was up and running the attention quickly turned to getting the Mobile Interventional Radiology (IR) Lab delivered and operational.

Riggenbach said the hospital administration and staff worked hard on the integration of a two-year Mobile Intervention Lab, as it would be the first of its kind in the state of California. For years California has banned the practice of performing cardiac cath procedures in a mobile lab, as is still the case now, but just recently the state began to allow Interventional Procedures to be performed in a Mobile IR Lab. (Abdominal, Cerebral & Vertebral Angiograms, Runoffs, Stents, PICC lines, etc. – basically everything outside the area of the heart.) The Mobile IR Lab was delivered in April of 2014 and the GE Innova 4100 digital flat panel detector imaging system allowed Natividad to both expand their services and meet the requirements of their Level II Trauma designation. Riggenbach said:

“Our radiologists are very excited to offer this new service line. Before, our patients in need of these procedures didn’t have anywhere to go – now they don’t have to go somewhere else.”

In fall 2013, Natividad Medical Center was recommended for future designation as the Level II Trauma Center for Monterey County. NMC was also awarded the 2013 Larry Gage Award by American’s Essential Hospitals – an honor bestowed upon six hospitals nationally for exceptional work in improving the quality of care for patients. 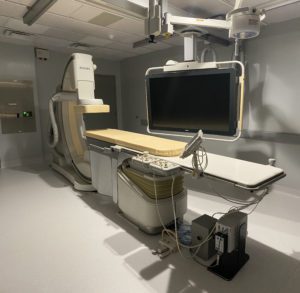 Modular Devices.
GET A QUOTE